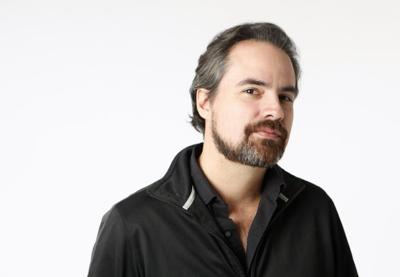 Alex Rivera is a filmmaker who, for the past twenty years, has been telling new, urgent, and visually adventurous Latino stories. His first feature film, Sleep Dealer , a science-fiction feature set on the U.S./Mexico border, won awards at the Sundance Film Festival and the Berlin International Film Festival, was screened at the Museum of Modern Art, and had a commercial release in the U.S, France, Japan, and other countries. Alex is currently developing Sleep Dealer as a TV series with the support of a major studio. He is a Sundance Fellow, Rockefeller Fellow, was The Rothschild Lecturer at Harvard University, and was named one of Variety Magazine’s “10 Directors to Watch.” In 2015 Alex was awarded major support from the Surdna Foundation and the Ford Foundation for The Infiltrators , which premiered at Sundance earlier this year, and received an Art & Technology Lab Grant from LACMA, as well as support from Time Warner for an experimental project in virtual reality. Other recent collaborations include a series of activist music videos produced by the National Day Laborer Organizing Network (NDLON) with artists including Manu Chao, La Santa Cecilia, and Aloe Blacc, which have collectively received over 20 million views. He studied at Hampshire College.