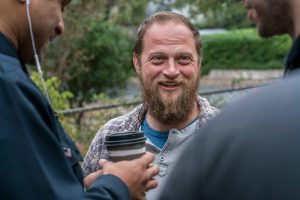 Benjamin Wiessner is a producer based in Durham, North Carolina. He was named to Filmmaker Magazine’s 25 New Faces of Indie Film in 2012 as part of the small collective ornana films. He has produced over a dozen short films in both hand-drawn animation and live action, with awards at festivals like SXSW and Sundance. He has also worked on ten features, including producing Thunder Road, winner of the 2018 Narrative Feature Grand Jury Prize at SXSW in 2018. He has been praised for his wily producer’s finesse with fire extinguishers.