Join the New Orleans premiere of Ethan Hawke‘s new film BLAZE on Wednesday, August 29th, at 7:30 PM at the Orpheum Theater! We are meeting for cocktails at Loa Bar between 5 pm – 7 pm, our members get a complimentary drink thanks to Loa Bar! A big shout out to the Orpheum Theater for their support and hospitality.

The screening is free of charge for New Orleans Film Society members and #NOFF2018 pass holders!

Become a member here, buy a pass here or do both, today! Limited tickets available to non-members here. If you are a member or a pass holder, please log in to your account at the ticket sales page to claim your free ticket.

GET YOUR TICKET NOW

BLAZE is a biopic of Texas outlaw music’s unsung legend Blaze Foley and written by Ethan Hawke and Blaze Foley’s former sweetheart, Sybil Rosen. Rosen will join us at the Orpheum Theater for a Q&A session on the 29th!

Hawke approached Rosen about the project after reading her own telling of Foley’s story in the book “Living in the Woods in a Tree.” The lead role of Foley is played by newcomer Ben Dickey (a musician by trade), and fans of Netflix’s Arrested Development will spot Alia Shawkat as the female lead (Sybil Rosen). Rosen plays her own mother in the film. Blaze was filmed in Baton Rouge, Louisiana and opened at Sundance Film Festival 2018.

“Blaze is hands down the best movie of its kind since Inside Llewyn Davis.” — Nick Allen, RogerEbert.com 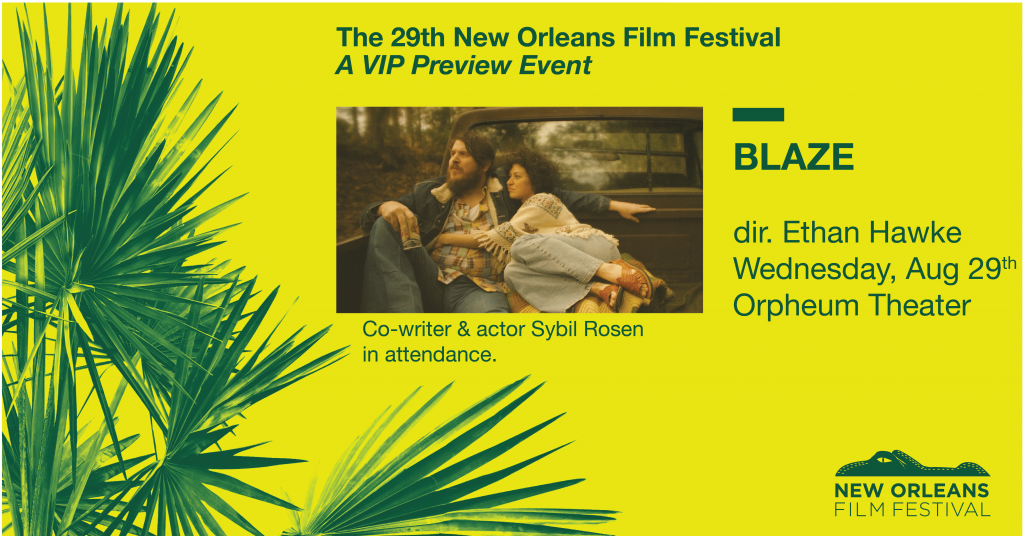