We are proud to announce that the New Orleans Film Festival is selected as one of the “25 Coolest Film Festivals in the World 2021″ by MovieMaker Magazine! 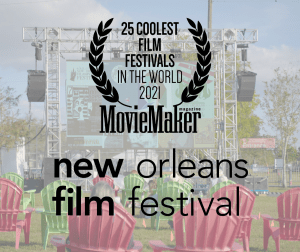 MovieMaker wrote–– “For my money, this is the best party festival in America, and artistic director Clint Bowie does a fantastic job of curating a slate of under-the-radar indies and a slew of great shorts to compete for their various competitions,” says Jane Schoenbrun. “One year they rented a party bus, stuffed it with filmmakers all dancing as we drove down the highway, and then dropped us at a secret warehouse somewhere in Louisiana where Win Butler from Arcade Fire DJ’d into the wee hours. Another year I ended up line-dancing at a county fair way out in the Bayou and then eating at the Waffle House in the middle of an insane thunderstorm. If all this (and a lot of really good food, of course — it’s New Orleans!) sounds like your scene, consider attending.” We have to admit we didn’t predict waffles coming up twice on this list. But seriously, folks: With a mission to “discover, cultivate, and amplify diverse voices of filmmakers who tell the stories of our time,” New Orleans promises that 90 percent of its films come from submissions, that at least half of the filmmakers are women or gender non-conforming, and that at least 55 percent of filmmakers are people of color. Given the events of last year, this festival also very coolly paid out its entire travel and hospitality budget of close to $40,000 directly to moviemakers.