Where Are They Now? Interview with Donna Dees-Thomases 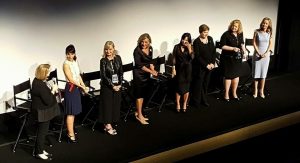 Our new guest at “Where Are They Now?” interview series is Donna Dees-Thomases, winner of the 2016 New Orleans Film Festival Best Louisiana Feature Award with Five Awake.

Over the years, Donna has promoted gun violence prevention and grassroots activism in hundreds of media outlets including on Meet the Press, Face the Nation, Good Morning America, the Today Show, and NBC Nightly News. In addition to her activism, Donna has spent most of her professional career in New York City at the CBS Network on its communications teams. Read Donna’s full bio here.

Fill in the blanks: If my life was a film, it would be directed by __Reese Witherspoon__, and I would be played by ___Patricia Clarkson___. Read my story here.

Although I’ve always wanted to be a storyteller — which is why I majored in journalism at LSU as an undergraduate and again at Northwestern University as a graduate student — it took
the five Louisiana women featured in Five Awake to turn me into a filmmaker.  They stood up to powerful lobbyists to reform the state’s domestic violence laws and their story needed to be told to a wide, national audience.  I was so lucky to convince the very talented Susan Willis to help me as my co-producer/co-director. Click here to watch the trailer of Five Awake.

My favorite spot in New Orleans is any of the outdoor tables at Herbsaint, and one thing I have to eat while there is Watermelon Gazpacho.  What makes a meal there even more nourishing is knowing that the owners of giving back to the community by supporting initiatives to end the cycle of violence and poverty which impacts so many of the city’s youth. This is their foundation website. 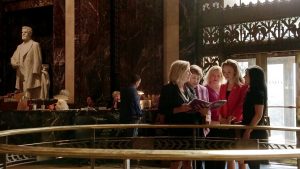 How has your life changed since winning a NOFF award in 2016 with “Five Awake”? How has winning changed you or your creative process? How has it affected the film?

After winning the award, I received dozens of invitations to screen “Five Awake” in Louisiana — so many that I found it easier to move back to New Orleans (my hometown) after 30 years of living in NYC.  How about that for life-changing? Also, winning the award helped me be less of a perfectionist. There were so many powerful interviews that never made it into the final film that I agonized over that until Susan Willis and I entered it into NOFF2016 and won Best Louisiana Feature.  I had to let go of trying to make “Five Awake” the perfect story.

Winning Best Louisiana Feature generated a ton of interest in the film, including a feature in The Hollywood Reporter. In addition to film festivals, “Five Awake” has been screened at universities, high schools, and domestic violence conferences.  Probably one of the largest screenings was hosted by former U.S. Sen. Mary Landrieu at the New Orleans Convention Center for several thousand nurses and healthcare workers.  In fact, right up until the pandemic shut-down, “Five Awake” was still being screened in public settings.  Most recently this past January at St. Mark’s Church on Capitol Hill in Washington, DC. Hopefully, the film has raised awareness of domestic violence homicide as well as inspired other advocates to pursue stronger laws in their statehouses.

Transformational.  In every way, particularly in building my self-confidence.  While I prefer to be behind the scenes, I felt perfectly comfortable sitting on the stage at the Orpheum Theatre in front of a packed audience for the follow-up panel discussion.  That sense of comfort was a first for me and I attribute it to the camaraderie, the hospitality, and the friendliness of the New Orleans film festival community.

When life returns to normal, I want to pursue a film about the creative women in New Orleans who use their art for activism.  I was inspired by a singer who performed at the Louisiana Women’s Policy and Research Commission last January at Kingsley House.  Women’s policy meetings — usually so boring — can be so much better with a band.